Hello, my highly esteemed blog readers, here is a fresh one from Adeola Adewusi (google that name), a talented contributor who has been on hiatus for a while but is back now- hopefully to hang around consistently now (LOL). She shares from her wealth of knowledge. Enjoy and kindly drop a comment.
************************************************
The backyard of our family house was all plastered, well except for two bordered angles close to the fence, left as some form of nursery for my mother’s subsistence farming. In this nursery was planted vegetables ranging from ‘bitter leaf’, tomatoes, to ‘scent leaf’, and upon my father’s discovery of the wonder-plant Moringa came the latest addition.
It turned out that dad’s Moringa seeds did not grow, so he sought help from experienced ‘Agriculturists’ and after several attempts that did not seem to yield, he was offered an option to transplant a shrub of the plant; thus began the journey to my father’s affection for the seeds, leaflets, and stems of Moringa. He tended it so much and even bought a separate blending machine for its produce. 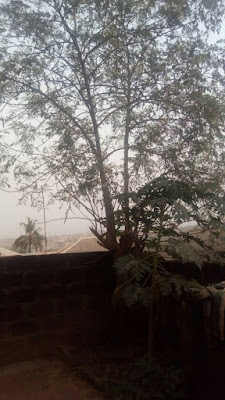 The crux of this narrative is the unexpected blossom of the unseemly Moringa tree. Whilst it remained a shrub, its ‘planter’ would water and tend and I tell you it was sheer providence that made it survive seasons…or so we thought.

I recently came home and was at the backyard praying when it dawned on me that our ‘poor’ Moringa had not only become a large tree towering above other shrubs, it had spread its branches into the adjoining compounds beside and behind our house! But it wasn’t the only one which had metamorphosed – on the adjacent nursery bed was the ‘bitterleaf’ plant too; it had become a tree overgrown to the next compound!
Now I doubt if we can uproot without damaging some structure.
What’s the rant about? I was nudged to understand this lesson:
While we were oblivious to it, there in the earth below the surface, these plants were taking root downwards and bearing leaves upwards.
It takes time, but usually there is always unnoticed root-taking when a seed has been planted.
Now the question is, “what seeds or shrubs are you (trans) planting?”
It will yield, no matter how long it takes.
So, be careful the kind of seed you sow into you; some harvests don’t end.
Will you be needing a whole tree of ‘bitterleaf’ to encumber the ground where you could have planted some tree with more economic (or, social) value?
That little act of kindness you’re sowing into people will yield too.
That time you’re taking to study will yield.
Those little efforts you’re putting to build a network of value around you, will yield.
That bitter attitude will also yield.
That purposeful investment will blossom when you least expect it.
Just plant the right ‘seeds’!
“As long as the earth endures, seedtime and harvest… will never cease.” Genesis 8:22
What other lessons can you glean from the unlikely trees?
i-Inspire…
ADEOLA ADEWUSI
#BeMore!
Error happened.
Post Views: 27