This is a story I wrote for an essay competition and of course It was shortlisted *winks*, don’t know if I made it further cos I lost interest because the award and packages was not encouraging enough( my mouth is big uhn?). My friend edited it for me,  i know she would prefer to be anonymous so i will respect that...Anyway I am sharing it on my blog today! enjoy, drop a comment because it provides feedback and share with friends!

“Never! No! No! No! Don’t tell me that! I won’t change my decision about them, they are almost always useless!”

Those were the words of Olutayo, the forty year old polygamist; as he sat at the bar drinking and chatting with his friends. He was arguing energetically on a cold evening. “A girl child has no value and they eventually end up as assets to their husbands”, he continued in his local language and spat on the grass nearby.

“OLU! OLU! The one and only OLU in town”, one of his friends hails him as he lifts his hands in the air. Another friend, Ade, said “Olu, don’t tell me you are serious.”

All his friends attempted to convince him that some women have made their marks in the sand of time but all their efforts hit a strong brick wall. Tunji, his longtime friend, started wondering if he meant what he said or it was the effect of alcohol.

The next day at work when Tunji felt the hangover of the previous day would have worn off, he cautiously approached his friend about the matter again and was stunned at his revelation.

As Tunji started to question Olu in the latter’s office, he was quickly interrupted. “Don’t think I was under the influence of alcohol; In fact, I meant everything I said yesterday”. Tunji was startled while he sat down to listen. Olu continued, “My father was a big-time polygamist before his death and he believed that the female child is not good for much more than home keeping. My father married his first wife- who gave birth to five girls within eight years, but yet was not satisfied and so he decided to marry my mother who birthed three boys and four girls for him.

He sent all the boys as far as the higher instuititon of their choice but sent the girls only to primary school; they were to learn a trade afterwards to support their husbands and now most of them are married and doing fine. What is the use wasting so much money on something of less importance? After all, it is only we the men that built the house he lived in till he died”. Tunji cringed at the level of his friend’s ignorance in spite being an educated man but since he was a grown up upon whom little influence can be had, he decided to leave him to his school of thought,  knowing that sooner or later,  he would realize. Eventually, events began to unfold and it did not take Olu a long time before he had a complete change of mentality.

Yemisi-the first of Olu’s five children, had the ambition of becoming a medical doctor but was scared of even breathing the thought to her parents because her father had been saying he was never going to sponsor any female child to secondary school. She had been made to help stay with her grandfather while he was sick and she watched the doctors go about ensuring her grandfather and other patients in the Renal ward had adequate care and recuperated quickly. However, her grandfather did not eventually make it to good health and she watched him die slowly but painfully. The experience was an unforgettable one for her and she made up her mind to help as many people as she could.

Yemisi enrolled in a vocational centre according to her father’s command but continued to secretly nurse her ambition. Her father paid her fee for the three-year apprenticeship hoping that after the training, she would start a trade and get married to one of his friend’s sons.

No sooner had she started than the Principal of the vocational Centre noticed her diligence and unusual attitude at work. He took two more months to observe her and finally he called her to his office.

“Well, the reason I called you is to find out why you decided to learn a trade rather than go to secondary school”, said the Principal.

“Sir, it was my father’s decision”, Yemisi responded.

“My father said all the girls in our family will not go to secondary school.”

Eyebrows raised in shock. “But why?” asked the Principal.

“Sir, I hope you will not confront him because he might deal with my mother and me.”

The Principal smiled, “Oh no, don’t worry. I will handle it well.”

“Sir, some people have come to talk to him and were offended eventually because he embarrassed them  and I know if you talk to him, he will think I reported him to you”, she said in discomfort.

“Just give me his mobile phone number and I will handle it well.

Trust me, dear girl. I will speak with him and he will change his mind.”

“Sir, if he asks you how you got his number, what will you tell him?”

“Don’t worry, I am very sure something positive will come out of this. By the way, what do you want to become in the future?”

“I want to be a medical doctor”, Yemisi said with much enthusiasm.

Yemisi went ahead to tell the principal why she wanted to be a medical doctor and she pleaded with him not to allow her father punish her.

The Principal called Mr. Olutayo on the phone and asked to see him; they agreed to meet at a particular bar to discuss something Mr. Olu did not know, though he was suspicious about it. On the decided day, the principal waited for barely five minutes before Olu arrived.
They exchanged pleasantries amidst suspicious glances from Olu. After ordering drinks, the Principal started the conversation.

“Well, Mr Olutayo, I asked to see you to discuss your daughter who is undergoing a training program in my vocational centre…”

Olu suddenly interrupted, “So that stupid girl spoke about me to you! I will deal with her severely.”

“Mr. Olutayo! Calm down! This is not to upset you or castigate your persona. I understand that you are a man and the head of your family and you decide on what you think is best for your family. Truly, there is no hard and fast rule to achieving anything in life; it’s whatever rocks your boat.”

“So, what am I doing here with you?”
“Well, it was not that she spoke about you with me. I actually noticed her diligence and wondered why she did not go to secondary school. I then called her and she told me  that was what you wanted. I decided to at least have a discussion with you.”

Mr. Olu shifts in his chair and listens.

“I am the first child of my parents and have four siblings. We had everything going well for us until my father died and left my mother to fill up the roles of both parents as both the provider and care giver.

Therefore, my mother had to be up and doing because she had a lot to handle.”

“Go on, please”, Olu says, showing interest in the story.

“She braced up,” the Principal continued, “put in more time at work and tried to be available at home during the weekends. She organized us well and put a lot of responsibilities on my shoulder as the first child. Before long, we adjusted and she was able to support all the five of us through university.”

“If she was not a graduate, where do you think she would have been able to get a well-paid job with which she could pay all our bills singlehandedly?

In fact, people advised her to remarry but she refused because she figured that any addition to the family would destabilize a lot of things and she would at least want us to live a settled life even though she could not afford luxuries. She did achieve that because all of us are graduates and are doing fine in our chosen fields. Just recently, we pooled our resources together and bought her a lovely car and a house in Lagos.”

“Therefore, Mr. Olu, all I am saying is, you never know which of your children will be the most successful and useful to you so why not give each of them an equal chance at the life they desire?

And lest I forget, Yemisi wants to be a medical doctor so I really want you to support her to achieve that dream and not limit her to only vocational training” ,the Principal concluded.

”What a great life-changer this Principal must be!” Yemisi’s father thought.  Mr. Olu experienced a mental shift from his gender bias to helping Yemisi achieve her dream.

The following week blossomed bright for Yemisi. Her father enrolled her in a good secondary school in the town they lived while insisting that she continued her vocational training after school hours.

That way, she would have double certificates after secondary school in case she changed her mind in the future. 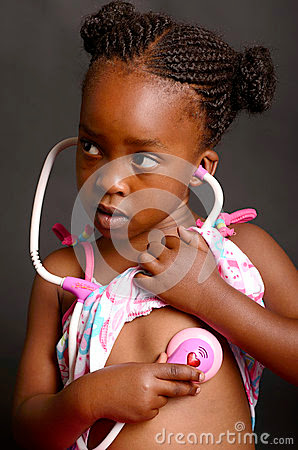